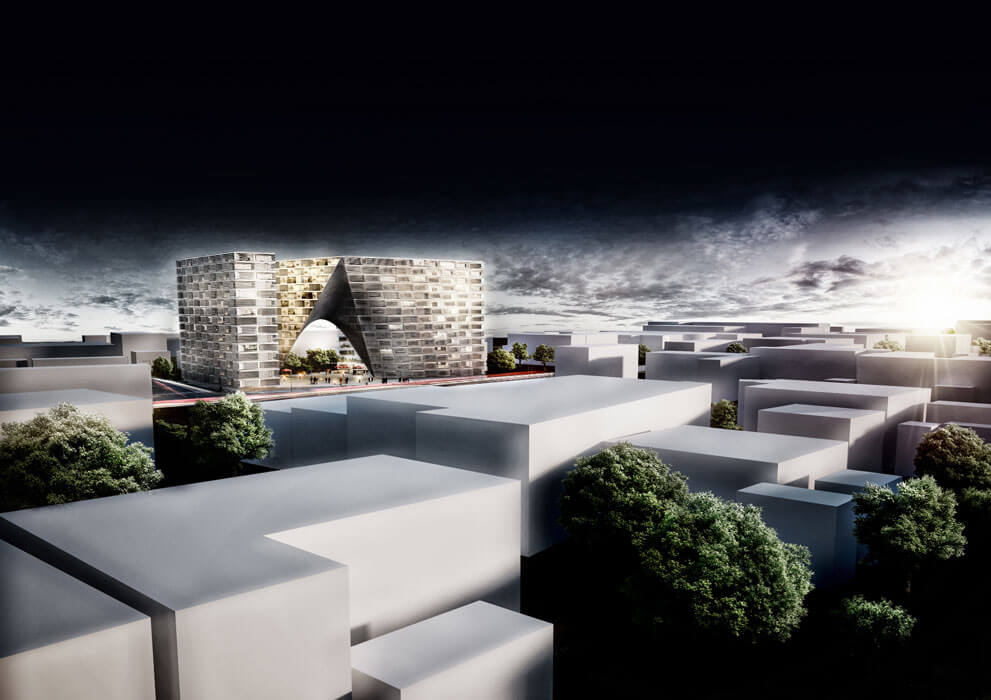 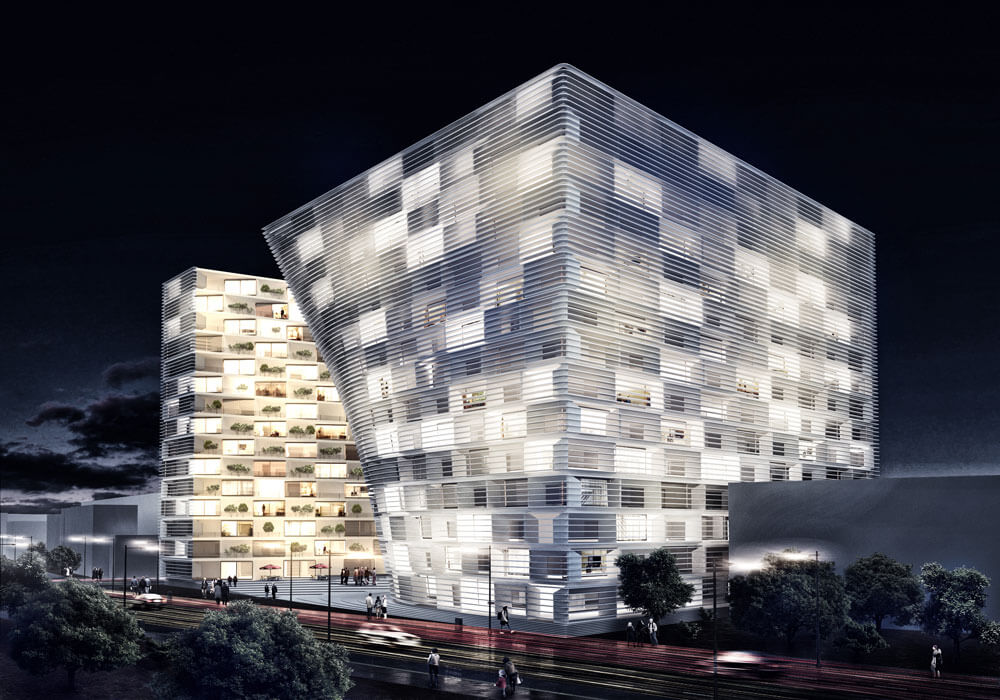 Alqadir II residential complex contains 360 residences in 14 stories in a site with an area of 8,500 square meters. The design is based on 2 main concepts: first, improving social life of the complex and second, creating a strong link to the cultural and architectural context of the city.

In order to focus on social interactions, a community 'square' is formed in the middle of the site. This public space will be the heart of the complex and all the residential units are arranged around it. Interior lounges and semi-private spaces in each floor further this idea and provide common areas for the residents. These 'neighborhoods' are crucial in providing security, social sustainability, sense of place and belonging.

The link to the city as the context of the project is achieved by several means. The general orientation and arrangement of the building put an emphasis on the city axis and establish a visual connection between the city and the landscape behind the site. On the other hand, cultural and historical identity of the city of Qom became the driving force behind the project. Qom, not far from the capital, is the home of the world's largest Shi'a seminaries and considered holy by Shi'a Islam. Therefore the form of arch, as a basic element of Iranian/Islamic architecture, was selected to act as a visual representation of the identity of the city. On another level, this iconic form can also present itself as an abstract shape adapted to a contemporary visual language. It also plays a crucial role in defining the public area beneath it and connects all the open areas of the project. The general form of the project also responds to the climatic conditions of the area and creates continuity and a united whole. Each flat has its own planted terrace forming a green wall all around the building. This green curtain acts as a filter for dust and adds the necessary humidity to the area's winds. Glass walls are equipped with insulators and shades where necessary. The complex got 2 stories of basement, being used as parking, storage and sporting facilities while the ground floor consists of pilotis. Floor area is 47,867 m2 in 14 stories, occupying 40% of the site (3,419 m2). 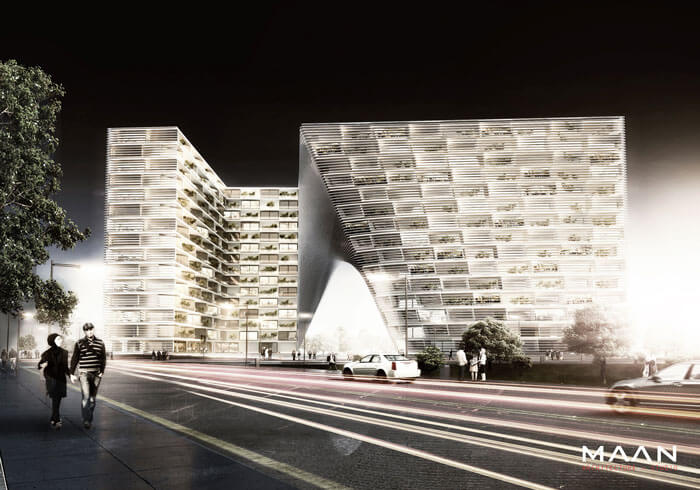 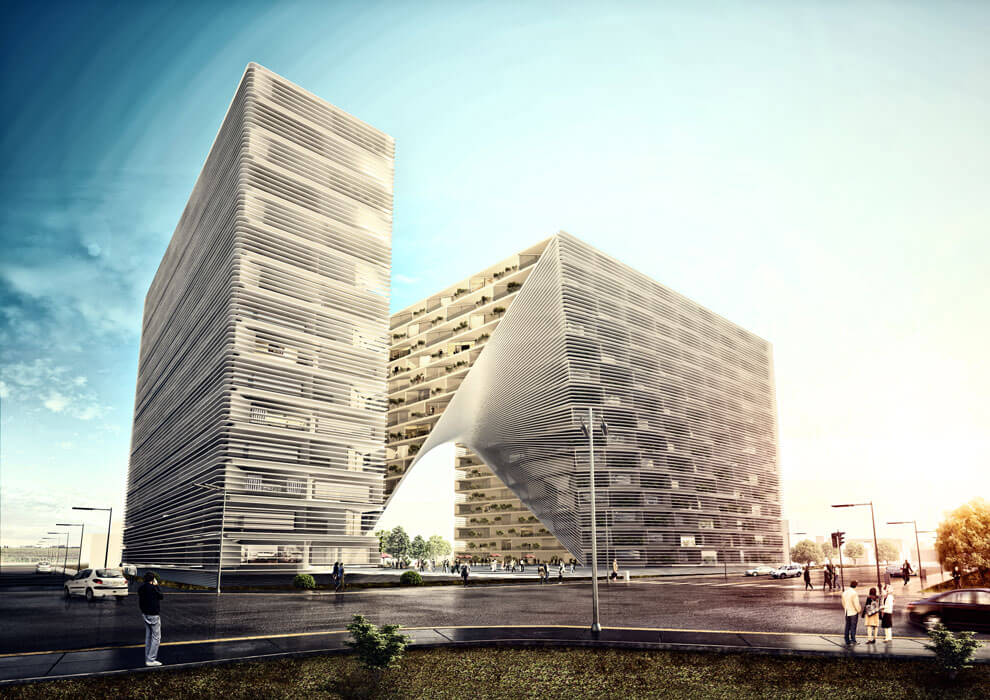 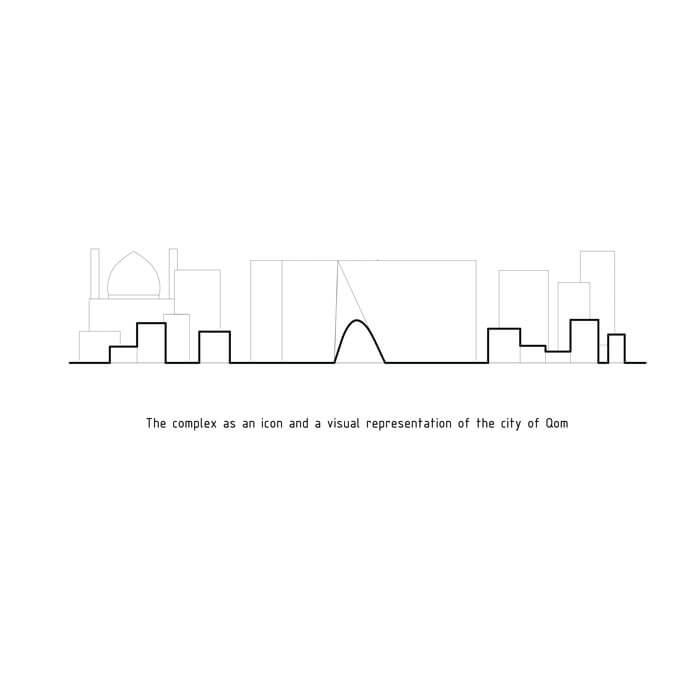 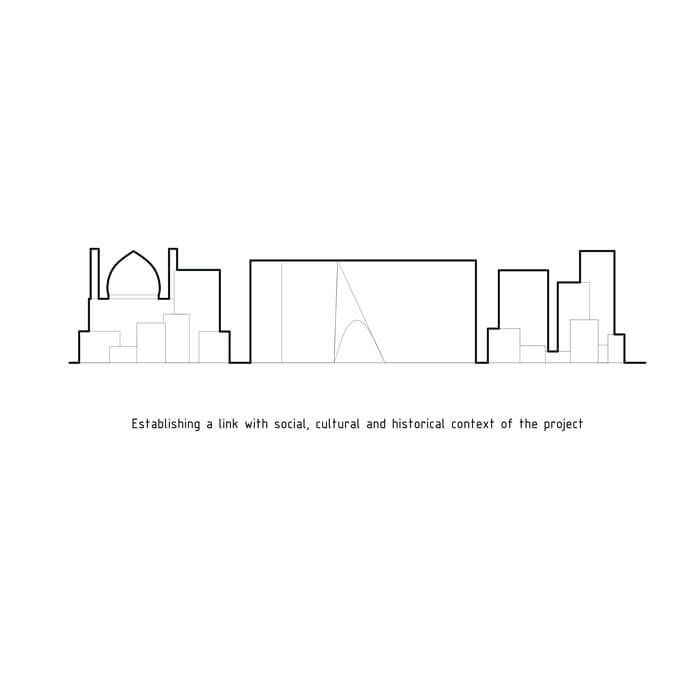 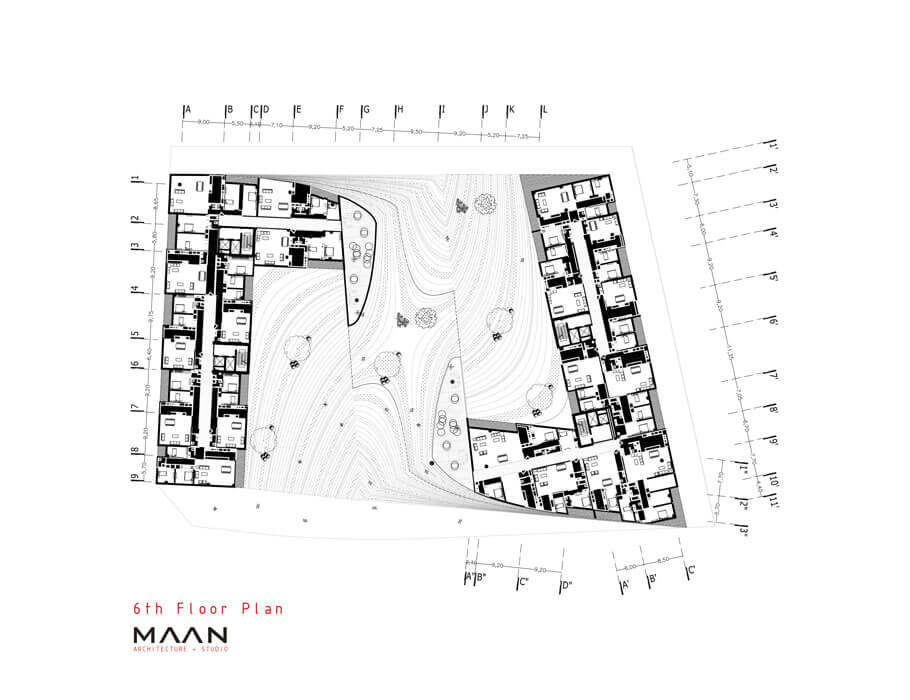 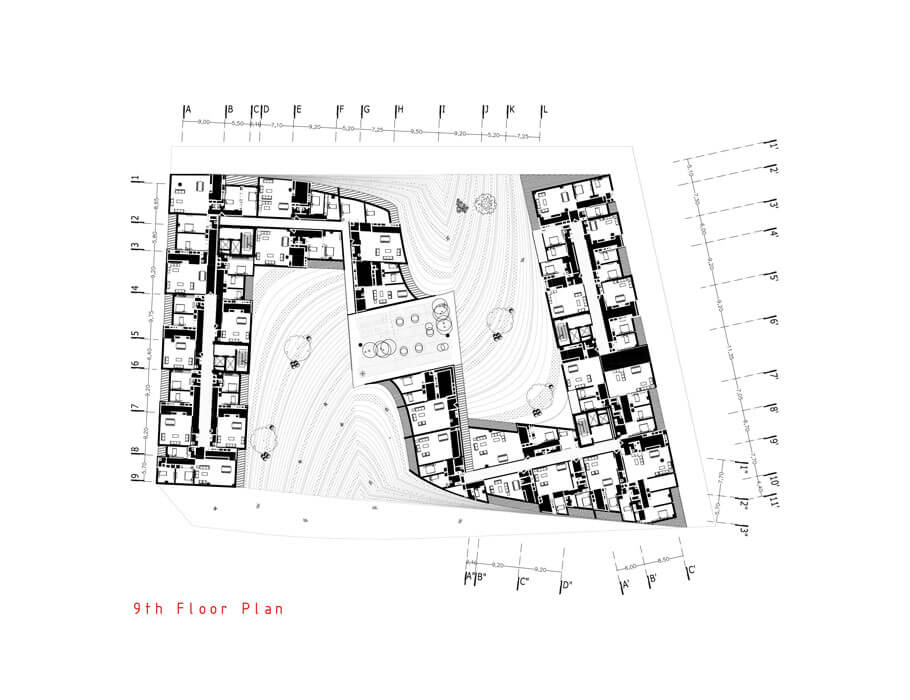 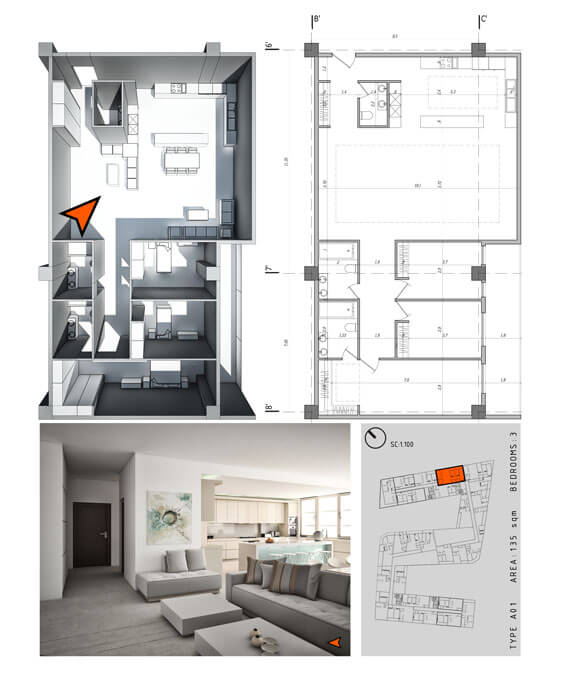 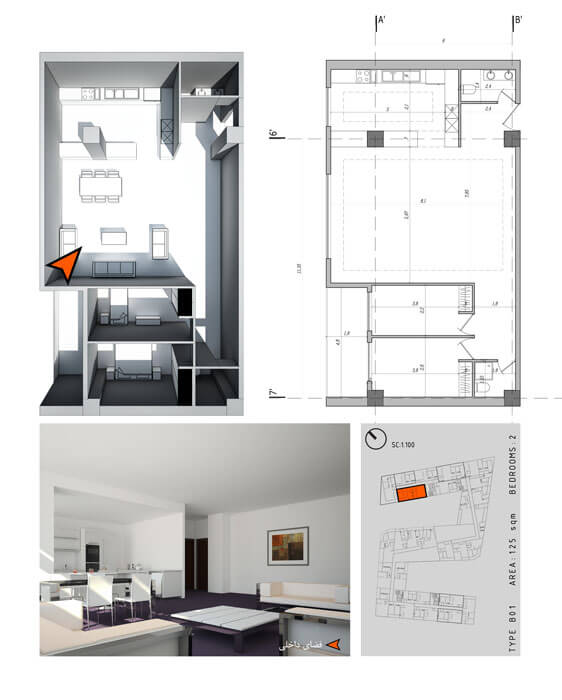 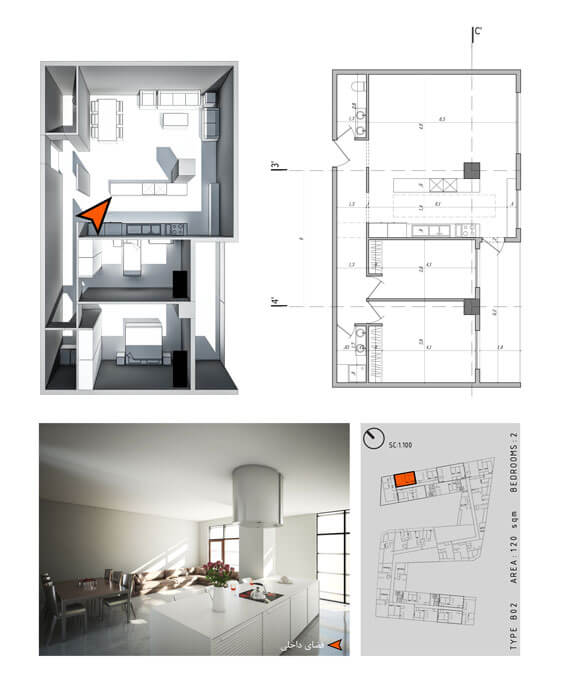 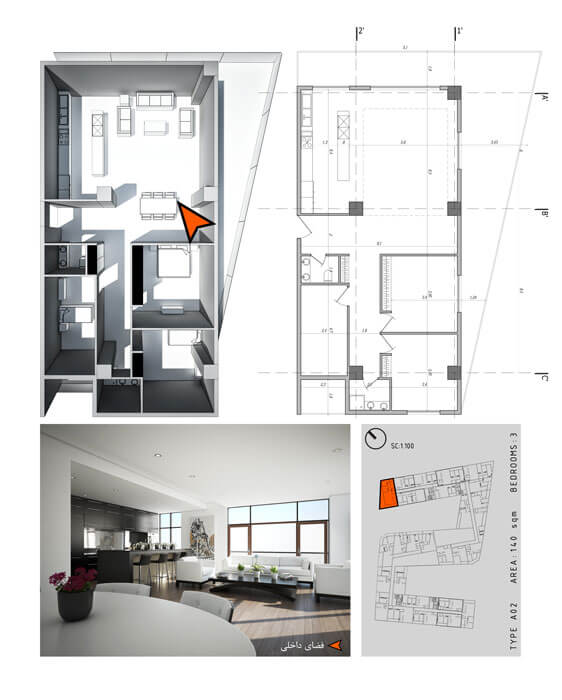